If you live in Grosse Pointe Woods, you do.

My first thought was “who doesn’t want a garbage disposal?” But after some researching online, I found out that there are many reasons to go sans-disposal. 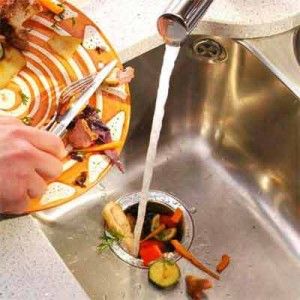 Sending your food scraps back into the waste water is costly to the system, and the grease from food causes plumbing problems in your home. But throwing away your food scraps and sending them to the landfill causes an increase in methane gas emittance which is harmful to the environment. The greenest way to dispose of food scraps is to compost them, and return the nutrient-rich results back into the soil.

After living for years without a dishwasher or a garbage disposal, I felt like a queen when I moved into my new house with both of these amenities. But I found myself overdoing it. I put such filthy dishes in the dishwasher that food scraps collected in the bottom and started to rot and smell. I shoved 12 jars full of homemade pickles (a failed experiment…I was trying to hide the evidence) down the garbage disposal at once, and broke it.

My advice would be to keep the garbage disposal, for convenience, for those times when you need it, but not to over-do it. In some cities, you have no choice. But if you don’t have one, don’t worry about it; you’re not missing out on much. Then, start a compost bin and turn your waste into nutritious food for the earth!